The target market that Uptime Infrastructure Monitor serves are IT professionals such as system administrators that need to monitor their IT infrastructure.

Uptime Infrastructure Monitor helps IT administrators to unify performance monitoring and optimization of IT infrastructure. Unlike its competition, it provides monitoring of a broad range of platforms and applications, ability to set service-level agreements, and support of both agent and agentless monitoring. 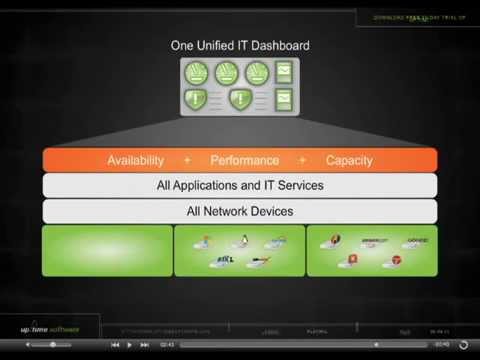 Right-Size Your IT Service Management. Modernize ITSM with an intuitive, fast-time-to-value, and intelligent solution. Freshworks named a Strong ... read more NinjaOne (formerly NinjaRMM) is the easiest, all-in-one IT management solution that MSPs and IT professionals love. Automating your patch management means that all OS and third party applications (e.g. Adobe, Chrome, and Slack) will be automatically updated and p... read more

Automating your patch management means that all OS and third party applications (e.g. Adobe, Chrome, and Slack) will be automatically updated and protected against known vulnerabilities. The process involves automating how devices are scanned, inventoried, and updated. The system should identify all applications and missing patches to then download the latest patch updates released by the application vendors. Domotz is a leading Network Monitoring and Management platform for Networks and Connected Devices. We offer powerful network management software for MSP's, IT managers, Integrators, Security Professionals. We offer the complete solution to cost-effectively manage and monitor your customers networks with plug and play setup, a friendly UX, and a comprehensive feature set, accessible from any desktop browser or mobile device. Malwarebytes Endpoint Protection provides complete malware protection and remediation with precise threat detection, proactive threat blocking, and thorough remediation, driven from the cloud and easy to use for organizations of all sizes.

CopperEgg's Website Performance Monitoring has allowed us to migrate from our in-house monitoring system to a distributed system, which reduced our monitoring costs. We utilize the diverse testing locations to analyze performance from all over the world. This has allowed us to determine and plan future environment expansions.

price - because of the price we might consider implementing the same idea with open source tools. in the long term it does make sense.

As TabTale's DevOps manager one of my missions is 0 down time on production & development servers. i've been searching for an application that will perform monitoring on our servers and alert. CooperEgg is amazing! we have set it up in a ridiculous time of couple of minutes to all our servers and we are talking about more then 30 servers. the dashboard and alert setting is very easy to use and customise.

«great solution for monitoring systems in the cloud»

only an agent install metrics are available in real time

Overall, CopperEgg is a great solution for monitoring systems in the cloud. There is no management console to constantly re-configure, as server instances are constantly brought up and taken down, the agent code is lightweight and very easy to install, and all metrics are available in real time rather than via a scheduled task such as Munin. Since we make heavy use of Amazon EC2, it's great to have a monitoring solution that basically requires only an agent install.

Ease of use Pricing Visibility into our EC2 instances

We signed up and were seeing data of our EC2s in literally a couple of minutes. CopperEgg gives us visibility into the health of our systems that we didn't have before and alerts us before we have an outage that we have a potential issue on the horizon.

«Nice NOC view - they are WAY too proud of it.»

Nice interface. After tweaking to get the look you want for your NOC, it is a good piece of eye candy for management.

I've used CopperEgg for 4 years and been very happy with them. Original developers have left and CopperEgg has been bought. Since being acquired, they've implemented price increases that are absolutely staggering. I originally paid right at $28/month for CE. At the end of the first year, they had a price increase to $30. Fine. A year later, they wanted to go up to $70. I fought back and got them to accept $50. Then, this summer, they've decided to increase their price their price over 500% !!! From $50/month to almost $300/month. That's absolutely insane. I've appealed - they simply don't care. That's fine. They're fired.

«Is CopperEgg worth it?»

CopperEgg is a cloud computing systems management company based out of Austin, Texas. CopperEgg provinces a family of Software as a Service (SaaS) based cloud monitoring services for public and private cloud environments. These services include Server monitoring, Website monitoring, and Web application monitoring that track system and application performance, and alerts on and helps troubleshoot system and application issues. CopperEgg software products integrate into public cloud providers such as Amazon EC2 and Rackspace. CRN Magazine included the company on its list of 10 hot new cloud startups to watch in 2011. And in 2013, the company was recognized with the 2013 North America Frost & Sullivan Award for New Product Innovation within Cloud Monitoring Solutions. The company offers both a free version and a paid version of their software. CopperEgg is in one of the best pieces of monitoring software I have come across. It seperates itself from the rest if the market because of how in-depth it's monitoring is. It also has a brilliant web interface which provides both graphical and text-based views of servers. It has several different types of server monitoring, it also monitors web apps and gather performance of any specified web app. While it isn't cheap it is well worth every dime because the insight it provides in to your services and websites is enough to redeem it's cost in preventing lost revenue by making sure websites and services stay online.

«Now an unethical company... lock up your credit cards!»

Good system, ticks most of the boxes

Immoral and greedy company with no interest in goodwill. I suspect they may soon become one of those companies with widely recognized reputation for ripping off their existing customers.

Well, after 5 years of using the CopperEgg services to monitor five key servers, we found a week ago that they've been charging us $150 for the same service we paid $70 previously. Looking at their free structure, they 'transferred' us from our old package to one with almost double times the capacity at over double the cost. They also have a 'pay per use' option, and on that system we would be billed half of the amount. But, then again, why behave reasonably when you can fleece your customer for an additional $463 over 4 months? When we approached them about this they refused to refund the difference, so now we're having to chase with the card companies to have this registered as a fraudulent charge. What a shame that such a good system is marred by such blatant greed and inappropriate response. We were happy to have the overcharge transferred to credit, but the answer was still no. We all have to *trust* the providers we deal with, and it appears the new setup of CopperEgg is not trustworthy, so buyer beware! We're now field testing DataDog and Stackify. Similar features, and hopefully a more honest organization.